Seismic (2D) profiles and cross-sections are viewed by selecting a line, and well log curve displays are viewed by selecting a well point (surface location) within ArcMap. 3D seismic inlines and crosslines can also be displayed by selecting within a 3D seismic survey polygon. Each seismic profile or well log is displayed in a separate window, and multiple seismic profiles and well logs can be viewed in independent windows. For seismic data and cross sections, the current visible shotpoint/CDP range is displayed and tracked on the map. Horizons and faults (raster grid/tin surfaces and polyline-Z features) and formation tops (from a related table in a geodatabase) can be overlaid on the seismic and wireline viewer displays. As with the Lynx standalone viewers Seisview and Logview, the viewers allow extensive control over the display scales and zooming, with many different display options (see screenshots below for examples), as well as printing to full-scale Windows-compatible plotters. 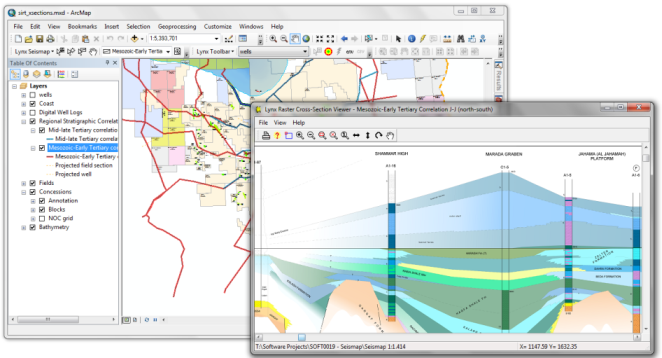 The image above shows a cross-section viewer launched from ArcMap, with the current cross-section range highlighted in the map view. This highlighted range can be grabbed and panned using the hand tool on the Lynx Seismap toolbar. 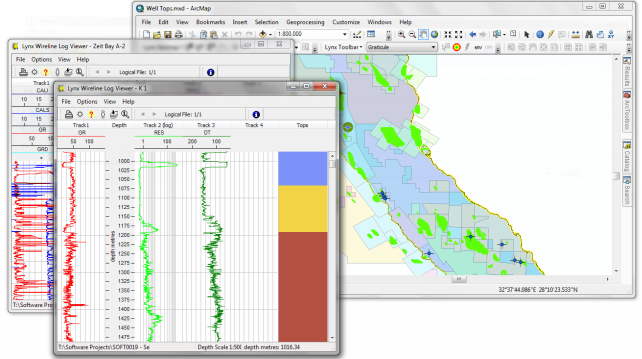 The image above shows well log viewers with a formation tops column read from a geodatabase. 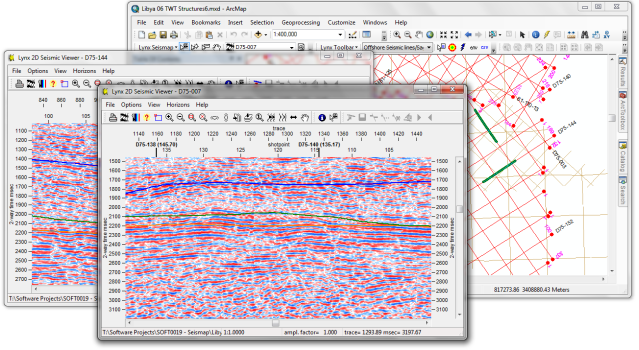 The image above shows a 3D seismic survey polygon (superimposed with live traces) in the main ArcMap window, with seismic viewer windows showing two inlines and one crossline in greyscale display mode.

The prerequisites for Seismap are similar to those required for standard ArcMap field-based hyperlinks.

For 2D seismic data, Seismap requires a polyline-M feature class or route event (which can be a shapefile, geodatabase or SDE layer) containing the seismic locations: each seismic profile should be a separate feature, with shotpoints stored as the measure values. The attribute table must include a field which contains the file-path targets for the seismic data. The seismic files can be either standard SEG-Y or Lynx TR-files.

For 3D seismic data, Seismap requires a feature class containing a polygon outline of each 3D survey, with inline and crossline numbers stored for each vertex as ID/M or Z/M values respectively. As with 2D data, the attribute table should include a field which contains the file-path target for each feature (ie survey). The seismic data for each survey should be stored in a single SEG-Y file per survey, sequential inlines stored end-to-end, with ascending crossline numbers for each inline. It is not necessary to pad all inlines to the same number of traces. Inline and crossline numbers should be stored in the trace headers of the SEG-Y data (header locations are configurable within Seismap). Lynx provides tools, utilities and integrated wizards to read coordinates from trace headers and create the required polygon feature classes.

For well log data, Seismap requires a point feature class containing well surface locations. the attribute table must include a field which contains the file-path targets for the wireline well log data, in either LAS or LIS format.

For cross sections, Seismap requires a polyline feature class. The attribute table must include a field which contains the file-path targets for the cross-sections. The cross-sections must be in a supported file format - at present this includes TIFF, JPEG, RLC or PDF. Seismap assumes that the orientation of the raster cross-section file matches the direction (order of coordinates) of its associated polyline feature - if this is not the case, then the cross-section viewer allows images to be rotated and flipped to correspond to the map view. 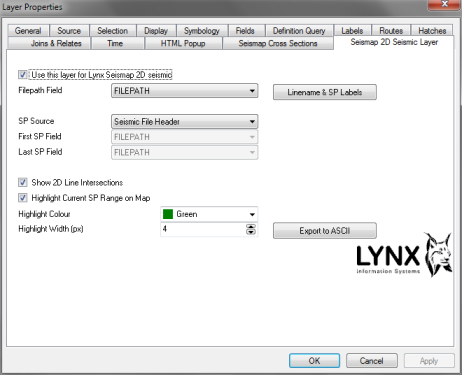 Seismap adds a toolbar to ArcMap, with individual selection tools for seismic, wireline and cross-section features, as well as import tools. 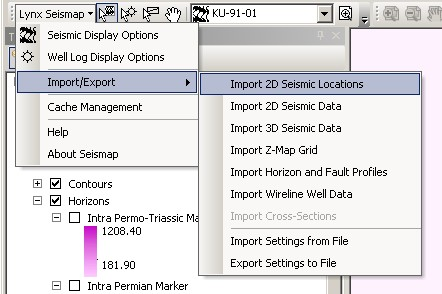 Horizon and fault polylines and surfaces can be displayed as overlays on your seismic profiles. Surfaces can be stored as either ESRI raster grid files or as TINs (display of TIN surfaces requires an ESRI 3D Analyst extension license). 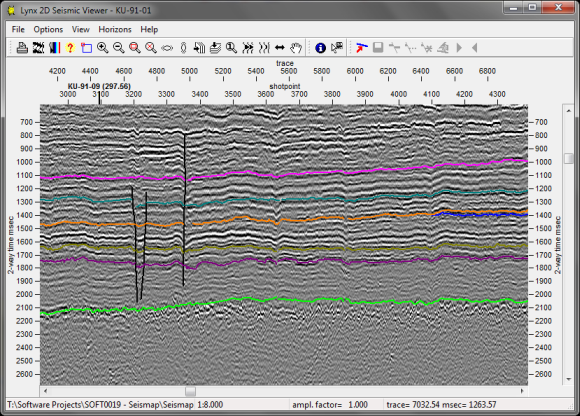 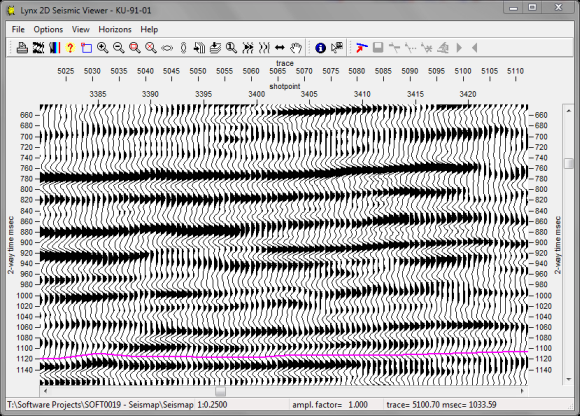 The images above show examples of a seismic profile displayed in greyscale mode and VA/Wiggle mode, with line intersections shown in the shotpoint scalebar and horizon overlays.

Seismap provides an alternative interface to ArcMap's labelling options, for quick and easy creation of seismic basemaps. You can easily set correctly oriented line names and shotpoint number labels using a simplified subset of the wide range of options available in ArcMap. 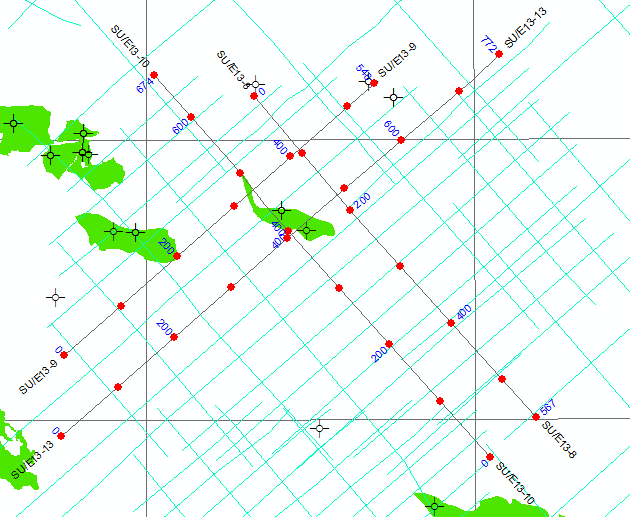 The labelling options are displayed in a dialogue which summarises and simplifies the ArcMap labelling and hatching options. 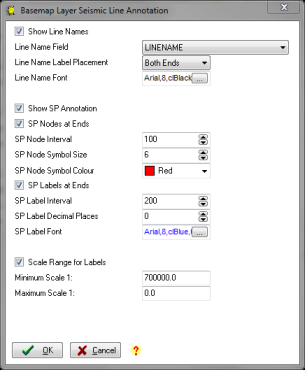 Seismap provides import and export utilities to convert between UKOOA-style (and SEG-P1) or CSV files and feature classes. 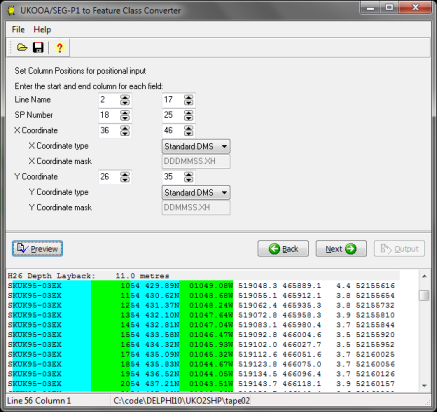 The image above shows the import of a UKOOA file. You can customise the column layout and coordinate format used in the input file to read most common variations on the UKOOA and SEG-P1 specifications. You can also import CSV files containing shotpoint coordinates. The wizard will create a shapefile which will be added directly to your ArcMap project.

Lynx Seismap can also import picked horizon and fault data to polyline-XYZ feature layers. These layers can be overlaid on seismic data (see above) and displayed by their Z-values in arcmap using a custom feature renderer designed specifically for horizon polylines: 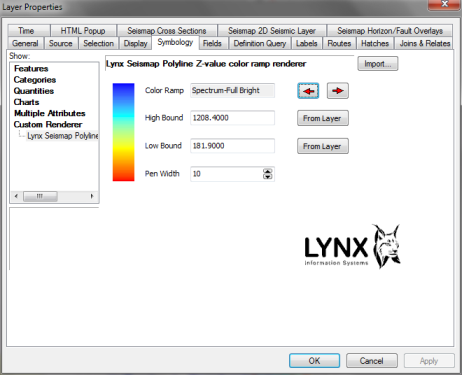 Choose the colour ramp to symbolise the horizon Z values. 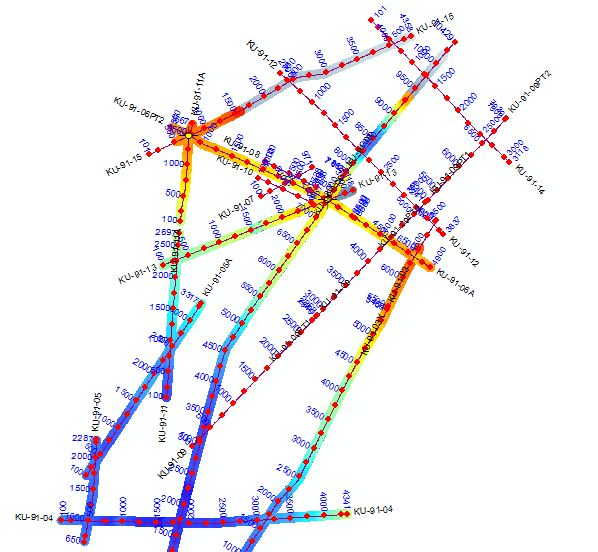 Download a trial version of Seismap and a sample ArcMap project containing 2D seismic data here, or contact us for more information.

ArcMap® and ArcGIS® are registered trademarks of ESRI Inc.